I recently wrote a blog post around ways forward for urban sanitation research, following a session on this topic run by WSUP and BMGF at the UNC Water & Health Conference. Later in the same conference, we (that’s Catarina Fonseca and myself of the Public Finance for WASH initiative) organised a similar session around ways forward for public finance research. Here I summarise some of the interesting stuff presented in this session.

Again we approached this question by asking four leading researchers to come up with ideas for a research project that could to drive a massive increase in government investment in pro-poor WASH, within the lifespan of the project. We asked the researchers to assume a $5 million research budget over a 5- to 10-year period, and we requested that the research be situated in a single country.

As noted in my previous blog, it’s a tall ask, of course: a research project that will drive “massive progress”. But if research can’t drive massive progress, or at least major progress… why do it?

To keep the audience on their toes, we gave them each $1 million hard cash, and asked them to allocate it to that project or those projects they thought would be most effective. With about 60 people in the room, there was a lot of (Monopoly) money sloshing around in there! 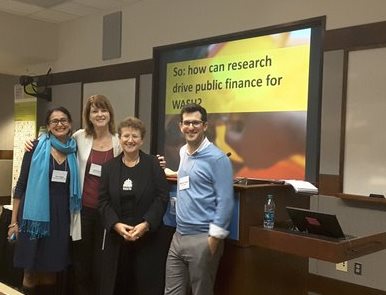 First up was Clarissa Brocklehurst, of UNC and SWA, who went all out for brand recognition by presenting with her now-famous Halloween witch hat.  She suggested that the core problem is that many Finance Ministers view WASH as a “dodgy investment”: they want to know how best to invest public funds for maximum effectiveness and maximum sustainability. She proposed research comparing a range of public funding models (direct funding to service providers? direct funding to households? funding to agencies doing mobilisation and promotion? seed funding to private sector entities?), and looking to identify optimal ways of mixing public and private finance. She also proposed parallel work looking at how public service providers can build consumer trust. We’d allowed her only one country, but her research was comparative... so she cleverly chose India, where she could work in different States. It wasn’t entirely clear to me how Clarissa proposed to design this research (would it have a quasi-experimental component, for example?)... but hey, we only gave her 5 minutes!

Next came Jenna Davis of Stanford. Jenna’s proposal was based on the view that there are 1000s of bankable small WASH projects out there: potentially profitable community-managed and SME projects with capital requirements in the order of $50K-$100K. Meanwhile, there’s plenty of philanthropic investment capital in the US and other wealthy countries. Jenna proposed an exciting approach for linking the two: setting up a rating agency (HydRate!) to evaluate a large catalogue of potential projects, aiming to put together portfolios of projects summing a total capital requirement of say $10 million (big enough for an investor to get out of bed for); piloting the approach at a small scale; bringing donor agencies on board to provide loan guarantees; and then shooting for scale. Rating/packaging costs would be about $5,000 per project, amounting to about 1-2% of project cost per successful deal. Sexy idea, and I’ve no doubt this could attract funding: though I have to say Jenna that this was not even remotely about driving in-country government investment! And as noted by IRC’s Patrick Moriarty from the floor, I’d question whether Africa really is thick with profitable small WASH projects just waiting for capital. But that said, Jenna’s idea won most money from the audience, so kudos!

Matt Freeman of Emory had already presented a different proposal in the Monday session. His proposal this time was essentially for a continuation of the excellent SWASH+ research programme in which he has been closely involved, supporting Kenyan government investment in schools WASH. Matt proposed extending advocacy to link to community delivery, using data to advocate for increasing allocation (a  “race to the top”  between Kenya’s counties), improving guidance on O&M spending, and promoting more efficient use of information... all aiming to gradually reduce donor funds requirement in supporting service improvements. There’s no doubt that the SWASH+ approach is an excellent model for research-into-policy: it would be great to see a similar approach applied with “bigger” aims (e.g. increasing government investment in slum sanitation).

In the coveted last slot (human memory is fleeting!) came Tanvi Nagpal of Johns Hopkins. Tanvi drew on her experience over the last 2 years doing research for my own organisation (WSUP) around how to encourage and support municipal governments to raise and allocate more budget to pro-poor sanitation. Tanvi suggested that the linear chain of “problem diagnosis” then “evidence creation” then “policy change” is fiction, and she proposed disruptive action research. “The poor lack a voice and have few exit options; and local governments may not have a contract with their poor citizens to deliver services. Moreover, they often lack the willingness and/or the ability to tax their citizens, and such taxes when implemented can be regressive.” She proposed action research around strategic advocacy based on an assessment of intergovernmental frameworks, of budgetary responsibilities, of revenue and expenditure, and of actors with influence to break the log-jam. Her project would build the capacity of civil society organizations and community groups to influence governments to more accurately account for public revenues and expenditures, and increase both revenues and expenditures in pro-poor ways.

The group discussion that followed threw up lots of interesting thinking, and we were lucky to have some pretty impressive people in the room, including key people from the World Bank, from Gates, from USAID, from SWA, from WaterAid, and from ministries and government agencies doing impressive stuff in countries including Uganda, Kenya and Sierra Leone.

So what do I take away from this? Well, maybe my conclusion will seem like a cop-out... in fact my view is that research-into-policy programmes should bring together research in all of these areas. I’d like to see research that drives governments to raise and allocate more money to pro-poor WASH, that supports them to put in place effective structures for WASH service delivery, and that helps them identify the most cost-effective ways of spending that money. No single type of research can support that. I would argue for research programmes that focus on individual countries that seem ripe for at-scale progress: Uganda say, or Kenya.  And there I’d argue for a coordinated programme of research-into-policy, designed to drive and support drive massive investment in pro-poor WASH (or perhaps focusing down on pro-poor urban sanitation, where domestic government investment is particularly important). That research-into-policy programme would be led not just by researchers in defined areas, but by specialists in policy influence (including quiet influence through technical support, political lobbying, and grassroots-led campaigning). The research would be specifically designed with government on board from the outset, generating evidence and guidance around how to do investment, running in parallel alongside implementation roll-out. Useful research of this type might include impact evaluation to explore and demonstrate benefits; research aiming to understand and overcome the key legislative and institutional contraints to effective government support for and enabling of service delivery; research around the most effective and equitable financing mechanisms, of the type proposed by Clarissa, and around how to facilitate effective and equitable investment; around how to track the effectiveness of investment. Alongside this, though necessarily somewhat distanced from the “supporting government” stream, disruptive action research could be helping develop stronger citizen voice to demand better services.

My co-moderator Catarina suggested something similar in many fewer words (she’s much smarter than me): she suggested that an ideal research programme would bring together Clarissa’s ideas to evaluate effective financing mechanisms and pathways, alongside formative/action research of the type suggested by Tanvi, to build “pressure from below”.

OK, I’ll try to express my own view in as few words. We need research programmes that align different types of research to support a common goal of massively increased and massively more effective government investment. Located in a single country, tied to that country’s evidence needs: “international learning” a secondary aim only. Led not just by researchers but also by policy specialists. National government and other in-country actors deeply involved in programme design from day 1. Potential funding amounts substantial, but tied to ambitious 3-yearly targets around government investment and at-scale impact: if the targets aren’t hit, the funding is cut.

That’s what blogs are for, I guess: crazy ideas! Now I’ll get back to my day job, making coffee for my team and deciding whether to approve that $73 invoice...