In this blog Faustina Asante of WSUP Ghana talks about some very interesting work being done in Accra around increased municipal finance for sanitation. It’s a fascinating example but we know that other organisations are doing equally interesting work, so, if that’s you, please get in touch! But for now, over to Faustina…


Environmental sanitation is considered among the powerful drivers of human development as it affects quality of life – improving health and rising wealth. Ghana’s commitment to the proportion of people having improved basic sanitation is described as being hugely off-track as current coverage level stands at 15% against the MDG target of 54%. Therefore improving sanitation and hygiene services in low-income urban communities has been highly challenging. In Ga West Municipal Assembly access to improved sanitation facilities has remained stubbornly low for many years. Moreover, communities’ demand for improved sanitation services remains low. Their voices have been weak of speaking up and expressing their needs before service providers and the municipal authority responsible for sanitation service delivery. It’s time communities recognize that holding those with power accountable is key to sustainable institutional and social arrangements that guarantee social services. The Assembly on the other hand, has given little priority to sanitation compared to other subsectors like water and education. For instance in 2013, GWMA budgeted less than 0.7% for sanitation compared to over 8% for the provision of water services.

In May 2014, WSUP actively began a work on Municipal Sanitation Finance Advocacy to increase municipality’s allocation for sanitation through improved property rate collection from municipal and community levels. The advocacy engagements were planned at the various levels to secure concrete commitments from key stakeholders.  They focus on lobbying for improved accountability and responsiveness among service providers and increasing community’s demand for equitable services. This advocacy work recognises that sustained behavior and social change is effective only when combined with changes in the broader socio- economic environment which includes addressing underlying and contextual factors such as budget allocations, property rate payment, etc. The main message behind the municipal level advocacy has been that: a market-driven approach to ensure scalable sanitation is critical. However, there is also the need for some sort of on-going revenue stream from the Assembly to create an enabling environment to support such initiatives with long term benefits for communities especially improved sanitation services.

At the community level, WSUP worked with the Environmental Health and Sanitation Department and the National Commission for Civic Education. The main aim was to foster effective coordination and collaboration to strengthen their capacities in empowering communities to take action. Four communities, including Amamorley, Amasaman, Pokuase and Kuntunse, emerged as the ideal locations to begin the advocacy work as WSUP already had a significant presence within the communities, resident associations and self-help groups were long established and functioning, and most importantly, these communities had the most motivated Assembly members and community leaders. Working closely with these community leaders, the team identified existing groups including resident associations, women groups, youth groups etc. By using a rights-based advocacy approach, the team has organized and facilitated a number of meetings to attain a collective community voice that results in more allocations of municipal funds within the communitiesto improve sanitation services and general development. It entails the building of community capacity to understand, and to make meaningful contribution to realizing these rights. WSUP strongly believes in the message that communities should “be the change you want to see” and, as Margaret Mead once rightly said, they should “never doubt that a small group of thoughtful, committed citizens can change the world. Indeed, it is the only thing that ever has.”

While the advocacy sessions are still in early days, they are showing lots of promise. Currently, the proactive steps to dealing with the sanitation challenge include making the obligations of the municipal assembly very clear to communities, informing the community members of their role in improving sanitation provision and the importance of paying their property rates as well as creating the opportunities and platforms for which communities can engage with the municipal assembly on sanitation improvements. Community reference groups have been set up to lead collective advocacy efforts and key local influencers have been identified and are being coached to confidently communicate problems and ideas as well as engage in question and answer sessions with municipal authorities on the need for increased resource allocation to sanitation. With emphasis on these steps and long-term investments, WSUP hopes to support the municipality in the prevention of sanitation-related catastrophes like the 2014 cholera outbreak. 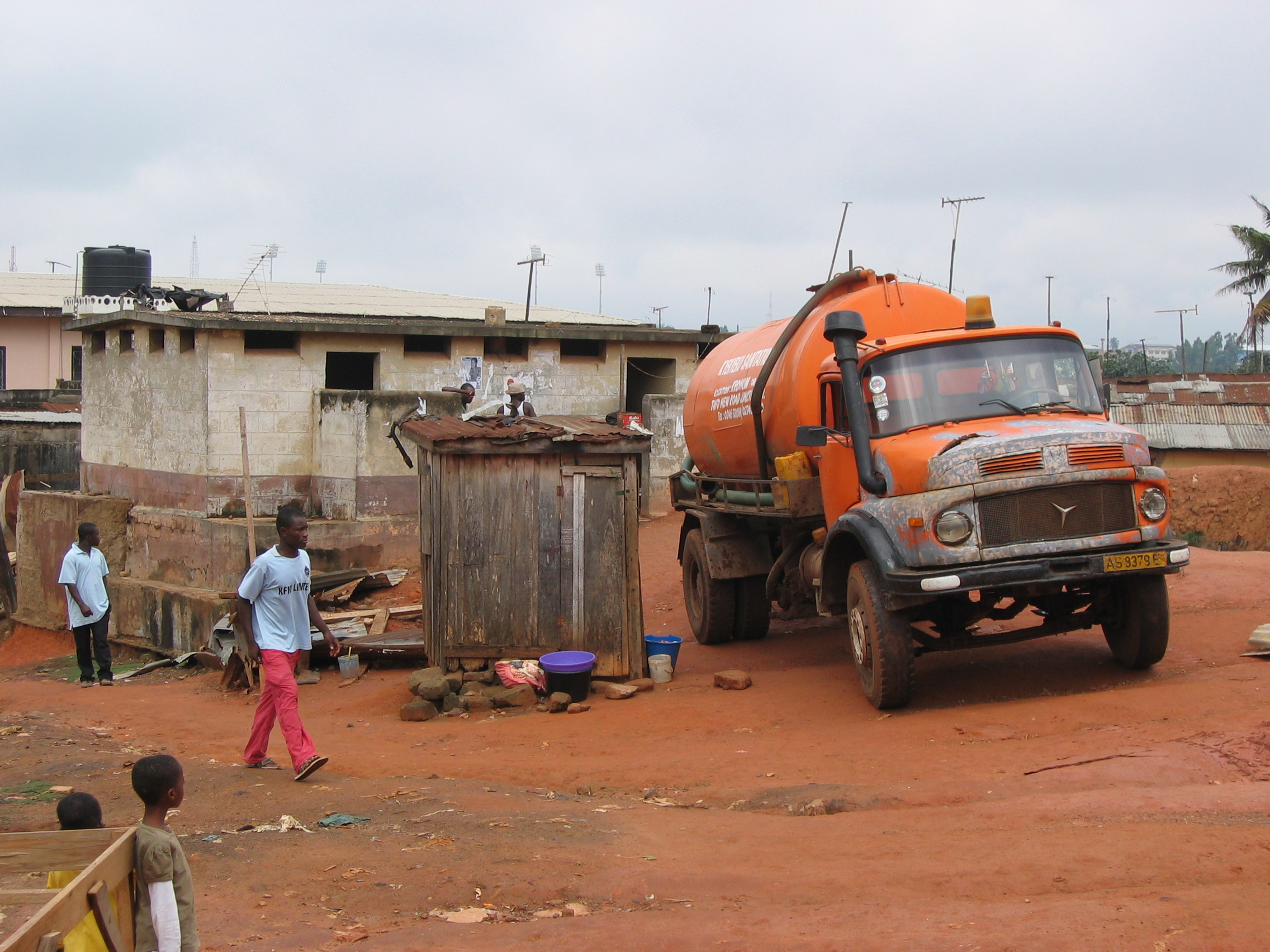 A large percentage of the community has no access to safe toilets, yet recognises the need to own one. However, one woman from Kuntunse noted that “the problem is partly due to our own priority for sanitation: Why are some people in this community with two smart phones, but not their own toilet?”They noted that access to adequate sanitation is inhibited by the high standards set by the assembly, the lack of affordable and innovative options, and the lack of low interest micro-finance for building toilets. Citizens generally agreed on the importance of paying their property rates but expressed deep concerns as follows about its utilisation for development:

Opinion leader from Kuntunse said: “I am not against the payment of property rates, but I don’t see what it’s used for. There are no proper drainages within the community and the gutters are choked with faeces,”
A resident from Pokuase explained: “Properties keep springing up each day, but the assembly has not kept up with valuation of these properties effectively and quickly enough. Many houses have not been captured and left at the mercy of unscrupulous revenue collectors. Meanwhile the assembly is always saying there is no money for development.”
Another resident from Kuntunse noted: “I have lived in this community for the past 5 years and nobody has ever approached me to pay my rate, I don’t even know how to pay even if I wanted to”.
A resident at Pokuase added: “The collectors at the revenue office have an attitude and always try to offer us different payment options – short-cuts”
Cheif and chairman of the Pokuase action group added: “GWMA feels it is doing well but this is because we the citizens are not demanding enough nor are we demanding for more action”

The communities understand that they need to take their destinies into their own hands. A resident from Kuntunse explained,

“We cannot talk about municipal finance without talking about self-help initiatives. The assembly has long ignored our community and we have largely developed through our own initiatives.”

Amamorley’s Assemblyman, Hon. Akwasi Appiah, heard the resident’s statements and said “it would be useful to publicise the various projects the assembly has done at the end of each quarter to encourage more people to pay” and to better communicate what the Assembly is doing for its people.

The next step for WSUP and its partners is to support the establishment of platforms to further encourage the dialogue between the various communities and the municipal assembly. Through these dialogue platforms, communities will be assisted in presenting appeals to the Municipal authority to lobby for increased financial allocations for sanitation in the 2016 and 2017 composite budget within their communities. Thus far, with WSUP’s intervention, the municipality is becoming increasingly responsive to demands for improved delivery of sanitation services to communities, and this push might just be what is needed to take it to the next level.