The Social Justice Coalition (SJC) together with Ndifuna Ukwazi (NU) produced a graphic report “An Unfair Budget: Dignity, Equality, and the Right to Sanitation,”on Cape Town, South Africa’s 2015/2016 draft budget on water and sanitation, to be tabled on 29 May 2015. This report shows that current budget allocations to informal settlements are very small and have been reduced over the years.

Based on this report, Judith February* writes the article “Raising a stink about sanitation budgets” (which we reproduced below), published on Eyewitness News (http://ewn.co.za/) on 21 May. In her article, February  includes a precise account by SJC activist and researcher, Axolile Notywala, who have been advocating for this issue.

Judith February looks at the declining budget for water and sanitation in Cape Town’s informal settlements.

If you are living in any one of the City of Cape Town’s 204 informal settlements, your living conditions are pretty certainly grim, with little prospect of that changing in the near future.

Well, not if the City of Cape Town’s latest proposed capital allocation for water and sanitation is anything to go by.

This week the Social Justice Coalition (SJC) and Ndifuna Ukwazi released probably one of the most powerful infographics indicating precisely how the budget for capital allocation in relation to water and sanitation has in fact decreased over the years. 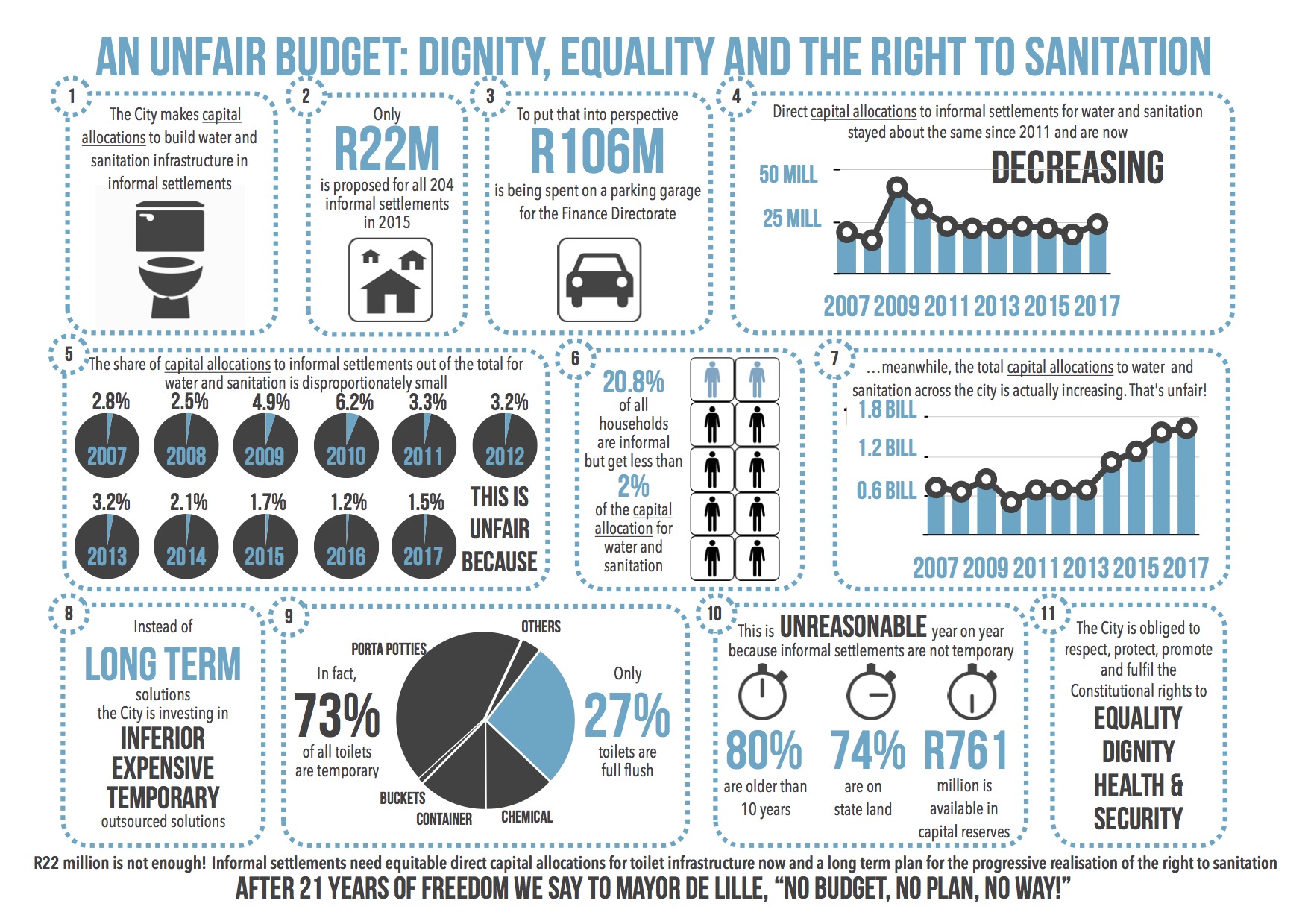 It is hard to understand quite what underpins such disproportionate allocation of resources other than a possible deep-seated belief that informal settlements are in fact transient ‘add-ons’ to a city and not an integral part of its life.

But amidst all the smoke and mirrors of budgets and council meetings, blame and name-calling and poo-flinging, the facts are often distorted. Many times over city officials have told SJC and Ndifuna Ukwazi activists that they are ‘obsessed with budgets’. Somewhere there has to be space for a debate which is inclusive and based on research aimed at presenting the facts.

Below is a verbatim account by SJC activist and researcher, Axolile Notywala. It presents some powerful and cogent arguments against the city’s proposed budget which is to be tabled on 29 May 2015.

‘On the 25th March the Mayor tabled the draft budget in council, challenging residents to find evidence that it is not pro-poor.

The following week I argued that the capital allocations in the draft budget for water and sanitation in informal settlements are decreasing and disproportionately small. That is public money allocated for flush toilets, taps and the necessary reticulation to connect informal settlement to the sewers.

Capital allocations for water and sanitation in all 204 informal settlements have remained static at around R23 million since 2007.

Surprisingly, the 2015 draft budget now proposes a decrease to R22 million this year and again to R19 million in 2016 before returning to R24 million in 2017. When adjusted for inflation, these allocations are even less in real terms.

Ald. Neilson states that people are “flocking” to the City, but in fact, the City’s data suggests an entirely manageable growth in informal settlement households of around 2% a year.

Another way to look at the City’s priorities is the share of the total water and sanitation capital budget that is allocated to informal settlements.

Here, allocations to informal settlements compared to the total water and sanitation budget were below 3% in 2007 and 2008, then rose to a high of 6.21% in 2010, before falling again to around 3% until 2013. Looking forward, the share illustrates a steady decline with the draft 2015 budget proposing less than 2% by 2017.

This lack of prioritisation is made more alarming when you consider that over this period, approximately 20% of all households in the City of Cape Town have and continue to live in informal settlements. That is a 2% share for 20% of residents.

Meanwhile, the total capital allocation for water and sanitation in the city has actually increased year on year from R729 million in 2007 to R1,6 billion proposed for 2017. The share of the water and sanitation department within the Utility Services Directorate has also increased, from a low of 30% in 2012 to the 54.3% proposed for 2017. How can the City justify the same disproportionately small amount to informal settlements again and again.

Ald. Neilson argues that these figures are only for toilets, that these are relatively inexpensive and do not include allocations for infrastructure for bulk delivery of water and sewerage across the City.

This is a red herring. In order to substantially benefit from this infrastructure, informal settlements require full flush waterborne facilities and reticulation networks.

However, at end of the 2013/2014 financial year, only around a quarter (26.76%) of all toilets were full flush waterborne facilities with access to the reticulation network. The remainder largely do not directly benefit.

Considering that the City has on average only built around 1300 full flush toilets a year since 2007 and the decreasing allocations to informal settlements, it is unlikely that significantly more flush toilets will be built over the next three years.

In the absence of further information, we must assume that this costly bulk infrastructure allocations do not benefit the majority of informal settlements residents because they do not have direct access to them.

So, when Ald. Neilson claims the City has ‘installed’ over 45 000 toilets in informal settlements between 2006 and 2014 and that the need for more reduces each year “given that infrastructure…has already been provided”, it is disingenuous.

Actually, 19 828 or 44% of these toilets are porta pottis and a further 25% are chemical or container toilets. So, the City has overwhelmingly prioritized spending on, and delivery of, temporary, expensive and inferior outsourced services in informal settlements as a long term solution, rather than investing capital spending on long-term infrastructure to service these informal settlements.

This is wholly unreasonable given that, according to the City’s own data in the Informal Settlements Development Matrix, roughly 80% of Cape Town’s 204 informal settlements (437 individual clusters) are older than 10 years, and a full quarter (24%) are older than our democracy itself.

The City simply cannot continue to treat informal settlements that have existed for so long as temporary. What is required is proper plans to ensure the right to sanitation is progressively realized, significant capital expenditure to support those plans.

Ald. Neilson argues that, “after careful consideration and calculation, we believe that the capital budget for informal settlement sanitation is sufficient for what can currently be achieved.

R23 million is simply not sufficient. It never was and never will be.”

Nothing needs to be added to or subtracted from these words.

If the city is serious about its constitutional obligations, it would provide a more detailed plan for the progressive realisation of socio-economic rights for all Cape Town’s citizens.

It would also provide greater levels of information regarding its budgetary decisions.

Pro-poor budgeting does not mean that a toilet will be built for each family overnight.

But it does mean being open, accountable and responsive to the needs of citizens and providing details regarding future sanitation plans.

Informal settlements are here to stay and treating them as irritating addenda to a ‘world class city’ is simply not a sufficient response any longer.

*Judith February is based at the Institute for Security Studies.

To read the response from Councillor Ernest Sonnenberg, the mayoral committee member: utility services for the City of Cape Town, to this column, click here.